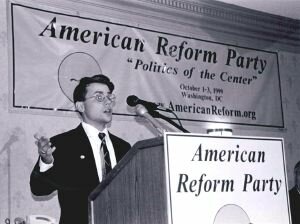 Some of you know me through email communications, but allow me to introduce myself . . . I am a young American. (Looking around, I'd say I'm one of the youngest Americans in the room ...). I'm here today to talk about a group of individuals that I am proud to be associated with ... Generation X. Why am I qualified to stand up here and talk about my Generation, its political involvement, and, more importantly, getting my generational peers involved in the political process, the ARP, and other third parties? For one, I'm an Xer. And two, I have the experience of trying to bring my generational peers and third party politics together.

When I was a University student at American University here in Washington, DC, I co-founded and headed up an organization called the Third Party League. The Third Party League brought representatives to our campus from third parties, no matter how small or large, liberal or conservative, young or old. We brought representatives to campus and held discussions forums, where parties could explain who they were, what their platform was about, and why they felt they could make a difference, and students could respond with any comments or questions in a free and open environment.

Our objective was to give students the opportunity to learn about and hear from political alternatives, outside of the Democrats and Republicans. To do this, we utilized all campus media outlets, and ran publicity drives so far as our budget allowed ... still with a our efforts, it was always a challenge to find the right method to attract young voters to our organization. When I graduated from American University, the Third Party League had a mailing list of approximately 100 people. Now, I, along with others committed to educating young voters about our political alternatives, are working to get branches of the Third Party League established on college campuses around the country. This is not an easy task...

So what is that we have to do; what is it that the American Reform party has to do to attract Generation X? To attract a generation of Americans that are in record numbers self-proclaimed "independents", refusing to accept a label Democrat or Republican?

Last weekend I was at the Democratic National Committee fall meeting, listening to candidates Bill Bradley and Al Gore. Held at the Washington Hilton here in Washington, DC, there was standing room only in the large assembly room. One of the issues on which the candidates got the most applause on from the general audience was campaign finance reform. And who made up about 90% of the general audience?

Generation X . . . Young voters. Those born between 1961 and 1981. Those that cannot answer the question "Where were you when JFK was shot?" Young professionals and college students, many wearing Bradley or Gore campaign stickers like badges of honor (others wearing Bradley and Gore campaign stickers like poor college students who will take anything that's free).

Campaign finance reform was a big issue for these young people ... Generation X ... and so was poverty: child poverty, in particular. In talking with Gen Xers from around the country in the past few weeks, I found that income inequality, and, as a couple of people put it to me, educational inequality, is something young Americans care about, in their own communities and throughout the country. Campaign finance reform and poverty . . . Generation X is very much alive and alert to the problems around us, in our communities and around the country. When asked what they think about the state of the country, a common response I got was "Things are wrong" or "Things are good, but they could be a whole lot better". Generation X is very much alive.

When I was talking with Xers from around the country over the past few weeks, and at the DNC meeting last weekend, and telling them what I was going to be doing here today, I had a few people ask me, "What ­ are you trying to be the next spokesman for Generation X?" Rightfully so, that question was put to me somewhat sarcastically and somewhat disdainfully, because there can be no spokesperson for a generation!

Sure there have been countless observation about work ethics, political attitudes and political apathy. In a book, for instance, that is due to come out in the coming months, authors Ron Zemke, Claire Raines, and Bob Filipczak talk about the assets and liabilities of Generation Xers in the workplace. Generation X assets, they assert, include: adaptable, technoliterate, independent, unintimidated by authority, and creative. Generation X liabilities, they assert, include: impatient, poor people skills, inexperienced, and cynical.

Generation X is also said to be particularly adept at multitasking, which is the truth in many office environments. Then there are some myths about Generation X: they're materialistic; they're whiners; they have a "you owe me" attitude; they're not willing to work hard; and they're living on "easy street". None of these can be substantiated in any way, and, in fact, can be contradicted quite clearly.

Politically, Generation X is sometimes referred to as the "issue-less generation" ­ a generation that has no wars to fight, no great battles like civil rights or women's suffrage. Gen X voters are said to be politically tuned out and apathetic. As Michelle Mitchell highlighted in her book A New Kind of Party Animal, and as I can attest to, Gen X is anything but apathetic. If anything, Gen X is disenchanted with politics and politicians. Instead, we are creating new rules and forming new institutions to make a positive difference in our communities. We're not apathetic; we're disenchanted with politics-as-usual, and, our feeling of political efficacy are quite low.

I conducted a survey of Gen Xers from around the country through e-mail, and one of the questions I asked was "Do you feel your involvement in the political process (through voting, working on campaigns, writing to your elected officials, etc.) will make a difference in government or governance"? The overwhelming response I got was "no", or else I got responses such as "It should" or "I hope so". That all translates into non-participation and further disenchantment. My brother, age 23, answered "no, what I do won't make any difference". Personally, I lean towards "It should" . . . then again my ex-girlfriend always said I was too optimistic; maybe I should say "no" ... but I'm not ready to throw in the towel.

There are several great organizations in public life committed to working for Generation X, or working with them. These organizations have been formed by young Americans, and they are led by young Americans. Such organizations include the 2030 Center, Third Millennium, and X-Pac. Michelle Mitchell discusses some others in her book. And we have a representative from another organization here with us today ­ Benjamin Glover, the project director from the Foundation for Individual Responsibility and Social Trust. I'm honored to add the Third Party League to this distinguished list as well. These organizations each have taught us some key lessons about getting young Americans involved, and these lessons should . . . must be applied to ARP's and any third party's efforts to attract Generation X.

First we have to give young Americans the opportunity to lead and create! We're not going to get in this political game to inherit our parent's problems; we're going to get in this to make our own future. This might just be a matter of semantics, but presentation makes a big difference. On the same note, it must be cautioned that Gen Xers and those younger will not get fooled by rhetoric and fancy footwork in the 2000 elections.

I predict that a majority of Xers (outside of any die-hard partisans) will reject the candidacy of George W. Bush and his efforts to dance around issues in an attempt to protect his lead, just as the judges denied victory to Oscar DeLahoya and his fancy footwork used to keep his lead against Felix Trinidad secure in their boxing match two weeks ago. ARP should attempt no smoke screens but rely on straight talk, and ARP should give young Americans the opportunity and independence to help shape party policy.

I challenge each of you here today to go back to your home states and home towns, find a place where you know there will be a large concentration of young people, such as on a college campus, and find one ­ just one ­ person that might be interested in the ARP. Tell that person that she or he is the sole responsible person at his or her college, church, or other setting to get ARP known; to include ARP in debates; to attract media attention, etc. I guarantee that she or he will make more of a difference than big money in politics. Do our individual actions in the political process make a difference? They should, and young Americans want to make a difference.

Senator John McCain issued a challenge earlier this week that can be tied in here. He said.

"We can continue to watch as the American people grow ever more alienated from the practice and institutions of democracy. We can continue to tolerate a government that had become little more than a spectacle of selfish ambition, a government auctioned to the highest bidder. Or we can take a stand. We can fight together to reclaim our government from those who corrupt it. This is our new patriotic challenge."

I again challenge each of you to recruit one young American on at least one college campus, or other setting, in your home state, and then watch the ARP web site as the greatest grassroots political movement is formed right before your eyes ... It is time for the third party movement to claim its natural supporters!

Thank you very much.